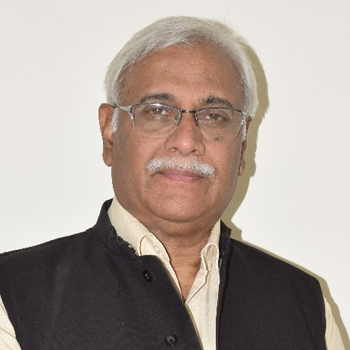 Prof. Arun K Pujari, Former Professor and Dean of the School of Computer and Information Sciences at the University of Hyderabad (UoH). He has been the Vice-Chancellor of the Central University of Rajasthan (2015-2020) and the Vice-Chancellor of Sambalpur University, Odisha (2008-2011). Prof. Pujari joined the UoH as Reader in 1985 and became a professor in 1990. Prior to joining University of Hyderabad, he served JNU, New Delhi. Prof. Pujari completed his post-graduation from the Sambalpur University in 1974 and got his Ph.D. from IIT-Kanpur in 1980. He has more than 25 years' experience as Vice Chancellor, Dean, Head of Department, and other administrative positions. He has served several high-level bodies of UGC, DST, DRDO, ISRO and AICTE. He has wide exposure in the national and international arena, and he has been invited to University of Tokyo, Japan, University of Paris-Sud, France, Griffith University, Australia,  Memphis University, USA and IIST, United Nations University, Macau on different visiting assignments. Prof. Pujari has more than 100 publications to his credit  and his book, Data Mining Techniques, was a popular textbook adopted by several universities in India and abroad.