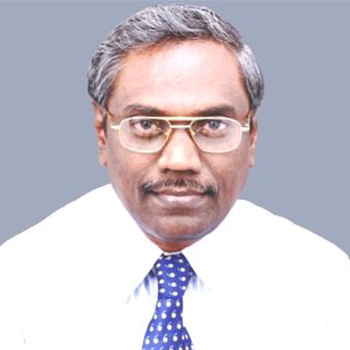 Dr. A.B  -  completed  his graduation in 1978 in B.Sc with Chemistry, Physics and Geology from Madurai University. He did his M.Sc in Geology from Annamalai University in 1980. He started his career as an Asst. Professor  at V.O. Chidambaram College, Tuticorin, from January 1981   and worked till 1994.

During this period of service at Tuticorin, he was selected by the Govt. of India and sent  to Queensland, Australia, ( through the BOYSCAST fellowship of DST ) for doing the  Post Doctoral Research  (Numerical and Experimental Simulation), in  the Civil and Systems Engineering Dept of James Cook University of North Queensland, Australia.

After his return, he  joined as Professor of earth science at the University of Mysore in 1994 and is still continuing his service.  In between, he also  served at Pondicherry Central University, as Pro-Vice Chancellor, from  2008 to 2010 (Director- Culture and Cultural Relations).

He has carried out a lot of research projects, and guided many Ph.D students.  He has conducted more than a dozen National and International programmes. Acted as Resource person in about 100 academic staff college sessions.

He initiated establishing   a  lot of institutions in four to five universities.

He has  developed curriculum for  more than 20 PG Degree and PGDIP, Dip. courses in several south Indian Universities.

The salient   accomplishment of Prof A.B are:

1.       Special Officer- Planning and Development, at the University of Mysore- introduced ICT in administration in 1998. Created databases, conducted NAAC, etc

9.       UGC Consultant for e-governance, member of several UGC committees(50 to 60) and Chairman for 5 committees( Computer Centres in Universities, etc)

13.   Published 155 research papers and 150 Technical reports in earth science and other subjects.

14.   Guided  22 scholars for their  Ph.D under my guidance in earth science, environmental science and electronic media.

15.   Designed 50+ career oriented courses and conducted them effectively in universities

16.   Worked as Chairman/ member of hundreds of committees in Higher Education at local and National Level.

17.   Dean-College Development Council (I/C) of Pondicherry Univ. and looked after the Affiliated Colleges -Carried out all affiliation works of 120 colleges( Pondicherry University).

20.   Member of the Governing Board of INFLIBNET, Member of NLIST, DTH Committee of MHRD, Adv comm of IGNOU TV channel

22.   Member/ member Co-ordinator/ Chairman  of NAAC Peer Team for more than 150 institutions during the last 16 years.

24.   Developed more than 500 video lessons and educational films which were shown in DD, Gyan Darshan.  Developed 200s' of E-content modules as subject expert in Earth Sciences.

28.   Former Member of the Executive Council of the Central University of Jharkhand.

29.   Former member of the Academic Council of the Central University of Haryana.

35.   He is the Recipient  of  Vikram Sarabhai Life Time Achievement Award  of  UGC, for my academic contributions in educational communication-2008.

36. He is the recipient of  Dr.Abdul Kalam Life time Achievement National Award-2017.