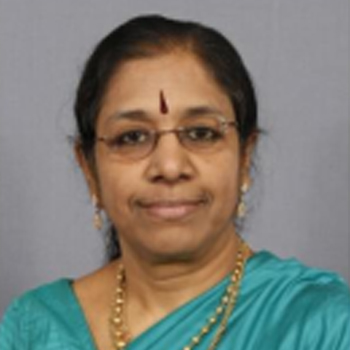 Dr.VaidehiVijayakumar, a renowned Academician and Researcher with 42 years of academic experience, did her BE in ECE at College of Engineering, Guindy, University of Madras,  ME in Applied Electronics at Madras Institute of Technology (MIT). She did her Ph.D. at MIT, Anna University, Chennai. She underwent advanced training in Multimedia Networking at Ryerson University, Toronto, Canada.

She started her career at Indian Institute of Science, Bangalore in 1980 as Scientific Assistant in School of Automation and Computer Science and joined Madras Institute of Technology in 1982 as Lecturer in Electronics Department.

She has organized several Conferences, Workshops, Seminars, and Faculty Development Programs in association with Industry for the benefit of students and faculty.

She has guided 27 Ph.D., 9 MS scholars. She has published 106 research papersin reputed journals, presented 273 conference papers, and 4 book chapters. Her h index is 24, i10 index is 73, and citation is 2419. She has executed several funded projects, worth 5 crores.

After her superannuation from MIT, she had served as Senior Professor and Dean, at School of Computing Science and Engineering, VIT, Chennai.

She is the Senior Member of IEEE, Fellow of IETE, Life member of ISTE and CSI.

She is the recipient of Active Consultant Award from Anna University in 2011,

Certificate of Achievement from Anna University for the successful launch of ANUSAT in April 2009.

She received ACU (Association of Commonwealth Universities) Fellowship to visit Universities in Singapore and Malaysia for a period of 3 months during April-June 1995,

She is a recipient of “Academic Icon” Excellence Award in the year 2020 from eWIT (Empowering Women in IT), Chennai.

She is Felicitated as Senior Fellow Member on 67th IETE Foundation Day Celebration by IETE Chennai Centre on 2 November 2020.