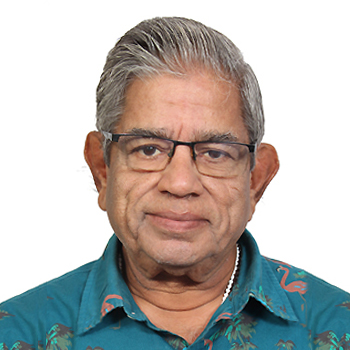 Dr. S. Vathsal obtained  B.E(Hons) in Electrical and Electronics in 1968 from Thiagarajar College of Engineering, Madurai ,Madras University. He got M.E in Electrical and Electronics Engineering from BITS Pilani in the year 1970. He obtained Ph.D. degree from IISC, Bangalore in the year 1974 from school of Automation on the topic of “ Minimax Approach to linear filtering Problems with uncertainties”. He has worked with Dr. APJ Abdul Kalam in Project SLV of Vikram Sarabhai Space Centre for four years in mission analysis group.

He did post doctoral Research in DFVLR  in Germany for two years under Alexander Von Humboldt foundation fellowship  and in NASA Goddard Space flight centre,  USA under NRC NASA research fellowship for another two years in the fields of Estimation theory and Application to Hybird aircraft  navigation and Spacecraft attitude determination during Kalman and  nonlinear Filtering techniques.

On return from USA  he worked in DRDL, Hyderabad as Scientist E, F & G. He was involved in Missile system design and simulation,Head of non destructive Evaluation division, and officer in charge Joint advanced Technology Program, Indian Institute of science. He then  retired as Director Extra mural Research & Intellectual Property rights from DRDO Headquarters New Delhi in the month of November and in the  year 2007. There he has sanctioned academic projects more than 300 in 90 educational institutions in India worth more than 40 crores.

In academic field he has served as Professor of Control Systems in PSG college of Engineering and Technology for two years and Principal scientist/ professor in research & training unit, Navigational Electronics in Osmania university for two years.

After retirement from DRDO, He  worked in VIT as Dean of Science & Humanities and Director Energy Centre for one year. He has worked as Principal of Bhaskar Engineering College, Hyderabad for two years and also as HOD (EEE) & as Dean (R&D) in JBIET, Hyderabad.

He has  published more than 90 Technical papers in national & international journals & conferences. He was chief Editor of international  journal of Intelligent Automation (IJIA), from Korea. He was Chief editor of JBIET Research Review which is JBIET quarterly Journal. He is life senior member of IEEE. He is fellow IETE and Aeronautical society of India. He is also fellow of  IETE, Life member of System society on India, Instrument society of India and Astronautical Society of India.

Recently he delivered Invited lecture in University of Minnesota, Minnepolis  USA on Application of Kalman filtering for Power Electronics and Power systems. He has guided 6 Ph.D students and currently guiding 4 Ph.D students. He is  member  of Governing council of JBIET  and Academic council and Chairman, Board of Studies, Electrical and Electronic Engineering branch.

He has got best paper award in three conferences and delivered keynote address in many international conferences.

He is recipient of the following awards.

7) He has been selected for prestigious GLOBAL ACHIEVERS AWARD TO BE PRESENTED ON 23 rd January, 2016 at Dubai which is holding a high level conference on ”CELEBRATING THE GLOBAL INDIANS”.

Currently he is working as CONSULTANT/ADVISOR of Skyroot Aerospace, a private company in Hi tech city, Hyderabad.